Learn more about English rules of capitalization and punctuation to help you become a more confident writer.

Inside or outside punctuation with quotations

If the quotation is 40 words or longer and will be formatted as a block quotation, place the period at the end of the quotation and before the citation (APA, 2020, p. 272). For example:

Compositors―people who layout printed material with type―made the original rule that placed periods and commas inside quotation marks to protect the small metal pieces of type from breaking off the end of the sentence. The quotation marks protected the commas and periods. In the early 1900s, it appears that the Fowler brothers (who wrote a famous British style guide called The King’s English) began lobbying to make the rules more about logic and less about the mechanics of typesetting. They won the British battle, but Americans didn’t adopt the change. (Fogarty, 2013, p. 1)

Spacing after a period

Per the 7th edition APA Style rules, insert one space after a period (APA, 2020, p. 154). To check for consistent spacing, take advantage of Microsoft Word’s grammar and style check, which will look for one or two spaces between sentences: 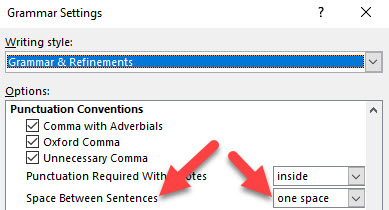 For instructions on turning on Word's grammar and style check, please see Check Grammar, Spelling, and More in Word.

When not to use a period

According to the APA Style rules, periods should not be used in the following instances:

Fogarty, M. (2013, December 23). How to use quotation marks [Blog post]. Retrieved from http://www.quickanddirtytips.com/education/grammar/how-to-use-quotation-...